This paper uses an extensive Facebook network dataset to document the extent to which migrants from different countries have social ties to American citizens. These uniquely rich data were accessible to the authors because they all worked at Facebook or Instagram at the time. Before diving into the paper, a couple points worth discussing up front:

Now, on to the data 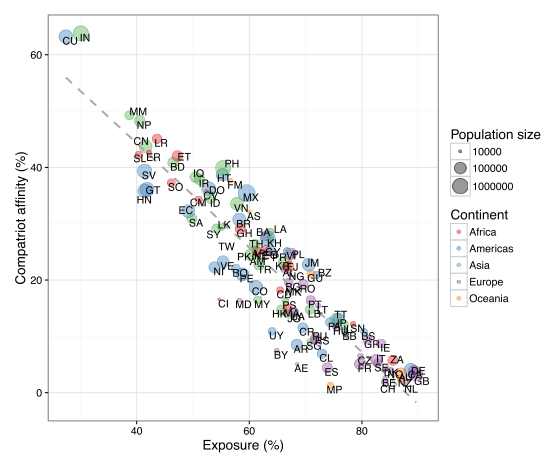 This simple description is interesting in itself since it shows how migrants’ social experiences in the US differ depending on their country of origin. This level description might be hard or impossible to obtain with accuracy through traditional methods.

The authors also include a questionable attempt to compare the geographic and online integration of immigrant communities. To measure geographic integration they compute dissimilarity, which is a very common and popular measure of neighborhood segregation. Usually dissimilarity is computed at the neighborhood level, and it’s magnitude can be interpeted as the proportion of people that would have to move to achieve a state of perfect diversity where every neighborhood’s composition matches the population composition of the broader region. Here, the authors use cities intead of neighborhoods, so their dissimilarity measure refers to segregation between major cities in the US instead of between neighborhoods. It’s hard to interpret this since we don’t usually think about cities being segregated from each other, and the though experiment of people moving between cities makes somewhat less sense. I don’t really think this analysis succeeds at what the authors intended, which is to compare geographic and online integration.